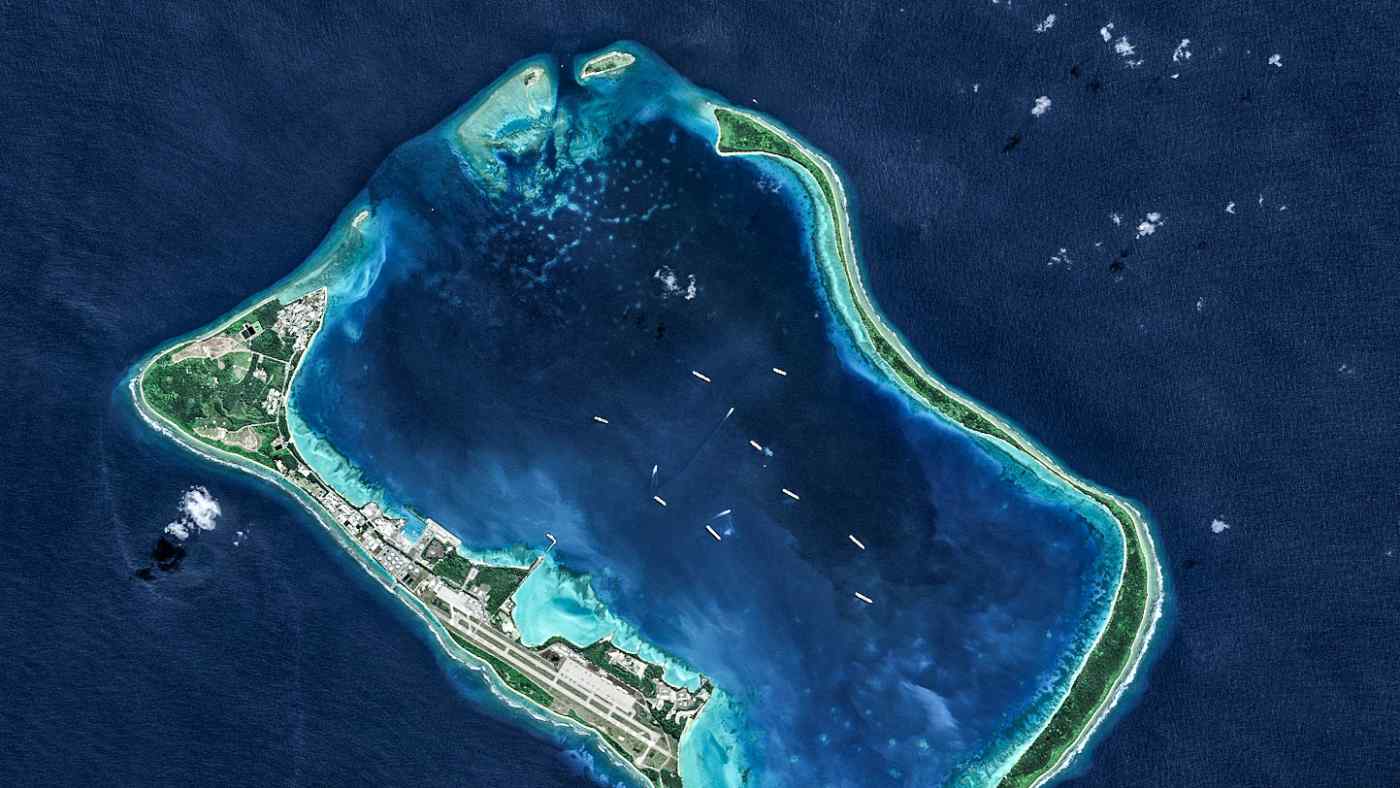 LONDON – A U.K.-U.S. military outpost on a remote atoll in the Indian Ocean is gaining increased strategic significance as the two allies seek to increase their engagement in the Indo-Pacific through initiatives such as the new AUKUS security pact.

Diego Garcia sits in the middle of the ocean, roughly 1,770 km east of the main island of the Seychelles. With a land area of around 44 sq. km, the atoll is the largest and most southerly of the 58 islands in the Chagos Archipelago, known as the British Indian Ocean Territories (BIOT).

With no permanent population, only people linked to the military facility, which dates back to the 1970s, or to the territory’s administration can access the island.

“Diego Garcia operates as the glue keeping the Western Indian Ocean linked, operationally, to the Eastern part of the Indian Ocean region,” Alessio Patalano, a professor of War & Strategy in East Asia at the Department of War Studies at King’s College London, told Nikkei Asia.

The logistics support base has been used to support a multitude of operations, namely “counternarcotic efforts, anti-human trafficking efforts, and efforts to counter illegal fishing,” according to the BIOT government’s website. It was used as a platform for disaster responses for the 2004 Indian Ocean earthquake and tsunami, the 2011 earthquake and tsunami in Japan, and the 2013 typhoon in the Philippines. It was also used to support the West’s military campaigns such as in Afghanistan. 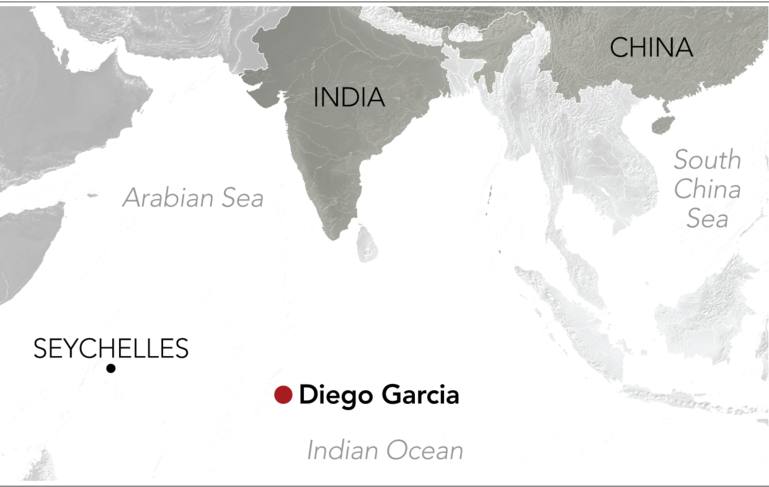 In a recent interview with Nikkei, Tony Radakin, the professional head of Britain’s Royal Navy, said increased engagement with the Indo-Pacific means utilizing the Diego Garcia base. Radakin was speaking days before the U.S., Australia and the U.K. unveiled a new Indo-Pacific security alliance.

“When I look at it through a Navy lens,” he said, “we want to have the ships that are operating much more strongly with Oman, with India, using Diego Garcia and operating down the east coast of Africa.”

Collin Koh Swee Lean, a research fellow at the Singapore-based S. Rajaratnam School of International Studies, said Diego Garcia gives a vantage point to “some of the world’s most critical sea lines of communications plying between the Indian and Pacific oceans.” These include energy supplies from the Middle East and North Africa region to countries in Asia, including China, he pointed out.

As part of strengthening its network in the region, the British government last year announced an additional investment of 23.8 million pounds ($32.8 million) into a British logistics hub at Duqm port in Oman, to triple the size of the base there. This will “help facilitate Royal Navy deployments to the Indian Ocean,” according to a U.K. government news release.

Patalano of King’s College said that “one of the interesting aspects about the future of Diego Garcia is going to be how activities conducted from there will be coordinated with the developing U.K. base in Duqm.”

British Prime Minister Boris Johnson has made clear that naval power is important to his government. The Royal Navy was the largest in the world at the outset of World War II, and has significantly downsized since, along with the dismantling of the British Empire. Now, the U.S., China, and Russia all surpass the U.K. in terms of fleet size.

In a recent major review of defense and foreign policy, the government pledged to deploy “more of our naval assets across the world” in order to protect shipping lanes and uphold freedom of navigation.

The Royal Navy has two aircraft carriers, six destroyers, 13 frigates, and 11 submarines, including ballistic missile submarines, 25 patrol and coastal combatants, as well as amphibious, logistics and support, and mine warfare and countermeasure vessels, according to the International Institute for Strategic Studies’ 2021 Military Balance.

“We’ve got a shipbuilding program, and the government will take decisions about whether or not the additional ships that we’re going to have, where are those going to operate around the world,” Admiral Radakin said.

The HMS Queen Elizabeth aircraft carrier is leading a carrier strike group in the Indo-Pacific on its maiden deployment. In early September, two River-class Offshore Patrol Vessels left the U.K. for deployment to the Indo-Pacific, set to last at least five years.

Beginning in 2023, the U.K. is planning to deploy a Littoral Response Group containing dedicated shipping, helicopters and boats to the region, with Type 31 frigates to follow later in the decade, according to the Defense Command Paper published in March.

“A persistent engagement in the Indo-Pacific will enable the U.K. to add a security provider layer to its relevance in the region, whilst allowing to better identify how to advance partnerships and cooperation with allies – as much as a better understanding of the challenges facing the region,” Patalano said.

While the U.K. has announced a “tilt” to the Indo-Pacific, it is not the sole strategic area of importance to the U.K., Koh pointed out.

“The Royal Navy does have to contend with limited fleet capacity, hence its permanent deployment to the Pacific would have to be seen in the broader context of London’s wide-ranging commitments across the globe, chiefly of all being its neighborhood in Europe, where there’s a Russian challenge to meet, and also the Middle East and Africa region which is critical insofar as energy security is concerned,” he said.

Admiral Radakin said that increased engagement with the Indo-Pacific was less about basing more personnel, and more about increasing activity with partners in the region, such as exercises, and discussing and supporting trade.

The BIOT is administered from London by a commissioner but Diego Garcia is leased to the U.S., which maintains a naval base there. The British are able to use the base for logistical support.

However, the eviction of the islands’ entire population between 1968 and 1973 to make way for the U.S. military base has damaged the U.K.’s reputation. After almost 20 years of legal action by former inhabitants, a British government minister admitted in 2016 that their removal had been “wrong.” The government also announced a 40-million pound (about $55 million) compensation package for the Chagossians.

Sovereignty disputes between London and Mauritius are also ongoing. The Chagos Archipelago was separated from Mauritius and made into the BIOT in 1965 when it was still a British colony. Mauritius was paid 3 million pounds; it gained independence from the U.K. in 1968.